Alex Morgan’s Return to the US

Alex Morgan is an American professional soccer player who most recently played as a forward for Tottenham Hotspur of the English FA Women’s Super League. Since 2018, she has co-captained the United States women’s national soccer team with Megan Rapinoe and Carli Llyod. In 2015, Morgan was ranked by Time as the top-paid American women’s soccer player and became one of two other female soccer players to appear on the cover of FIFA video games. Morgan also appeared on the cover of FIFA 16 sold in the United States. She was also named one of Time’s 100 Most Influential People of 2019.

In September 2020, Morgan signed with English FA Women’s Super League team Tottenham Hotspur. The contract ran from September through December 2020, with an option to extend the deal through the end of the 2020-21 FA WSL season in May 2021. Morgan made her Spurs debut in November 2020 after still recovering from giving birth in May 2020 and regaining fitness after not having played since August 2019. She scored her first goal for the team on December 6, 2020, Spur’s first league win of the season. But on December 21, Tottenham Hotspur announced Morgan would end her contract and return to the U.S. 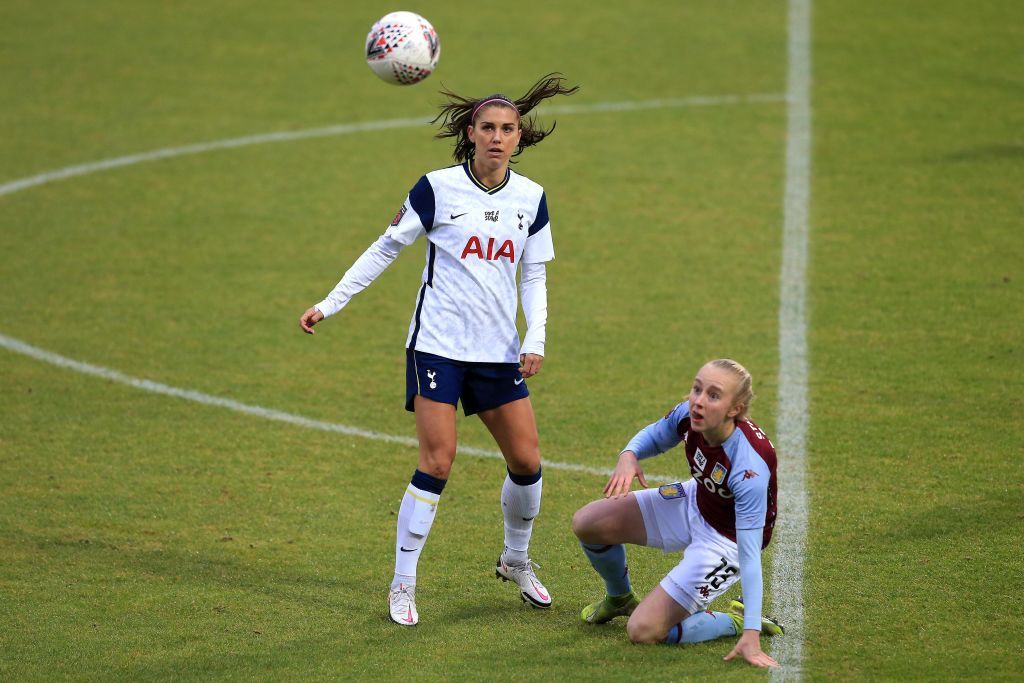 A Tottenham statement read: “We can confirm that Alex Morgan will be returning to the United States in the new year after the conclusion of the first half of the FA Women’s Super League season.” Morgan is expected to rejoin Orlando after they retained her rights to play in the National Women’s Soccer League. Morgan said: “I will be forever grateful to the club, my teammates and Spurs supporters for taking such good care of me and my family. From the moment I arrived in London I realised I was part of a first-class organisation, one that helped provide me the opportunity to immerse myself back into the game I love. Thank you to everyone who helped make this chapter in my soccer journey so special … COYS.”

Tottenham’s head of women’s football, Heather Cowan, added: “We were delighted at the start of the season when Alex chose us as her club to help regain fitness and take her first steps back into competitive football after giving birth earlier this year. “It has been a pleasure to have Alex with us during this period and the whole squad has taken a lot from working every day with someone at the top of the women’s game. We wish Alex all the best for the future both at club and international level as she prepares to return back home with her family. She will always be welcome here at Spurs.”