In climes full of sunshine, though splendid the flowers,
Their sighs have no freshness, their odour no worth;
\‘Tis the cloud and the mist of our own Isle of showers
That call the rich spirit of fragrancy forth.
So it is not \‘mid splendour, prosperity, mirth,
That the depth of Love's generous spirit appears;
To the sunshine of smiles it may first owe its birth,
But the soul of its sweetness is drawn out by tears.
Open Chunky Cardigans
Are they old-fashioned?
Andrew Parker - Jan 25, 2023
The Life And Legacy Of Bob Marley
How the “One Love” star firmly placed Jamaica on the map
Andrew Parker - Jan 23, 2023
Fun Nail Art Ideas
Here are some fashionable and elegant ways to paint your nails!
Laura Lee - Jan 21, 2023
The Last of Us: Reviewed
Nearly a decade later, The Last of Us is still a masterpiece.
Andrew Parker - Jan 18, 2023
Benefits Of Cycling For The Elderly
Cycling is a great activity for the elderly to release stress and have a longer life.
Andrew Parker - Jan 16, 2023

Jennifer Lopez brought down the house at Global Citizen’s VAX Live: The Concert to Reunite the World. For the big show, the 51-year-old singer took the stage twice at the philanthropic concert event, opening the concert with a special rendition of Neil Diamond’s iconic song, “Sweet Caroline.” The concert special was taped last week at SoFi Stadium in Inglewood, California, last weekend. Dressed in a glistening silver ensemble, Lopez began her performance by noting the emotions she felt of not getting to spend time with her mother amid the COVID-19 pandemic, which is what prompted her to choose to sing the ’70s classic.

“When I was thinking about what song to sing tonight, I remembered the song she used to sing to me when I was baby,” Lopez shared, before she asked those in attendance to “indulge” her and sing along to the track. Midway through, Lopez brought her mother, Guadalupe Rodríguez, on stage to finish out the classic song which she tweaked the lyrics to “Sweet Jennifer.” When it came to the special moment between Lopez and her mom, Global Citizen CEO Hugh Evans previously told PEOPLE it “was entirely Jennifer’s idea,” adding, “I think the great thing about J. Lo is her creative vision is so precise.” 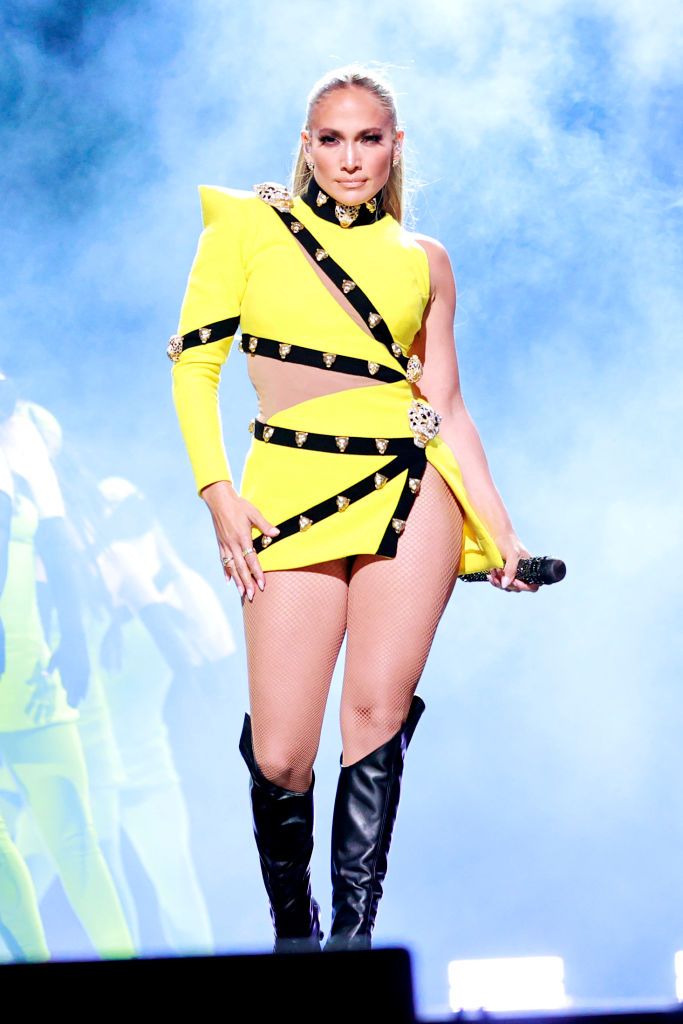 Of the sweet mother-daughter moment, Evans also said, “I was sitting on the production desk watching when she brought on her mum and I was like, ‘Wow, that’s it.’ I just felt the goosebumps all over. There was something incredibly powerful about that moment of connection after the year that whole world is endured.”Later in the show, Lopez hit the stage once more and wowed with a follow-up performance of her 2016 single, “Ain’t Your Mama.”

Dressed in a mixed-colored outfit that was accessorized by a pair of black boots, the mother of two was supported by an array of backup dancers all dressed in various colorful ensembles. Earlier in her set, Lopez celebrated being “all here in the same room” to those “beautiful” individuals gathered to take in the show, adding, “We’ve been away from our loved ones for too long, but we’re back. But while it’s getting better for us, there are people all over the world, especially in Africa, India and in the Latin world who still need our help and our vaccines,” the actress continued. “That’s why we’re here tonight.”

When Global Citizen reached out to Lopez to headline, “she was incredibly generous and just said straight away she’d love to, and the momentum built from there,” Evans previously told PEOPLE. VAX Live, hosted by Selena Gomez, also featured appearances from Ben Affleck, Chrissy Teigen, David Letterman, Gayle King, Jimmy Kimmel, Nomzamo Mbatha, Olivia Munn and Sean Penn. Prince Harry and Meghan Markle also served as campaign chairs of the concert, which aimed “to inspire vaccine confidence worldwide and help get the COVID-19 vaccines to everyone, everywhere” according to a statement by Global Citizen.