Sean Connery Has Been Married For 4 Decades

Unfortunately, we live in a world where long-lasting marriages aren’t what they used to be, especially when it comes to Hollywood.  But actor Sean Connery has proved all stereotypes wrong with his marriage that has lasted 40 years (and counting). His love with his wife Micheline Roquebrune Connery shows that true love still does exist. And despite the fact that their story isn’t the typical Hollywood movie script, they are still best known to the world as Mr. and Mrs. Bond.

Sean met his wife Micheline in Morocco back in 1970 at a golf tournament dinner, where they felt an instant, undeniable connection with each other.  When they had met, they were both recently divorced, and Sean was actually still in the process of finalizing his. Micheline is reported to have dreamt about his the night they met, and upon waking up, she felt like she had finally found peace in her life, confirming to her that Sean wasn’t just another man. 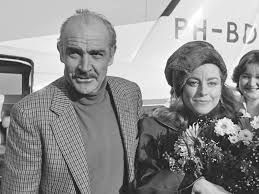 The next morning, Micheline returned to the tournament to seek out Sean. But from there, it wasn’t all your typical fairy-tale story. Since they were both living far apart (Micheline was living in North Africa with her kids)  it was a challenge to see each other on a regular basis. The lovebirds also had a language barrier – but also proved that love truly does always conquer all, and their will was strong enough to found a way.

Sean and Micheline have been happily married for more than 4 decades already, and are still very much on the same page, still sharing a passion for golf, which today is also still a big part of their lives. The Connery’s are well known for their adorable dates and for their ability to proudly share with their endless and true love with the rest of the world, inspiring people across the globe to never give up on love.